A duckbilled dinosaur, Hadrosaurus foulkii roamed the forests and swamps along the bays of New Jersey's ancient seacoast. Today its bones are found in ancient marine deposits with fossil seashells. It was about twenty-five feet long, probably weighed 7 to 8 tons and stood about 10 feet tall. We think Hadrosaurus stood on its hind feet when running, but used it front feet to support its head while grazing. Its abundant blunt teeth confirm that Hadrosaurus was a vegetarian, a peaceful plant eater that could chew tough-stemmed twigs and leaves. Hadrosaurus lived about 80 million years ago late in the Cretaceous Period.

Hadrosaurus foulkii became the official State dinosaur of New Jersey in 1991 after years of hard work by a teacher, Joyce Berry, and her fourth grade classes at Strawbridge Elementary School in Haddon Township. As a result of their efforts, New Jersey has a truly unique symbol of its prehistoric past.

CHAPTER 161 OF THE LAWS OF NEW JERSEY OF 1991
An Act Designating the Hadrosaurus foulkii as the New Jersey State Dinosaur.
BE IT ENACTED by the Senate and General Assembly of the State of New Jersey:


1. The Legislature finds that:
a. The Hadrosaurus foulkii, the first nearly complete dinosaur skeleton to be discovered virtually intact anywhere in the world, was unearthed in October, 1858, in a marl pit in Haddonfield, Camden County, by William Parker Foulke, a member of the prestigious Academy of Natural Sciences of Philadelphia.
b. This discovery of a 25-foot, eight-ton, duck-billed, herbivorous saurian (or reptile), which stood as high as ten feet at the hips, was so unexpected and unusual that it startled the scientific thinking of the day and led to a revision of many conventional ideas as to the physical structure and life habits of prehistoric reptiles and provided a great stimulus to the study of dinosaurs which, until then, were relatively unknown outside the scientific community.
c. This dinosaur, which lived 70 to 100 million years ago during the Cretaceous period and which was given the name Hadrosaurus foulkii in honor of its discoverer, was the first dinosaur to be displayed for public view, attracting tens of thousands of visitors to the Academy of Natural Sciences where it was on view from the 1870's to the 1940's.
d. The Hadrosaurus foulkii has been recently reinstalled as one of the main features in a permanent exhibit at the Academy of Natural Sciences.
e. In order to pay recognition to the scientific importance of New Jersey's Hadrosaurus foulkii, it is fitting and appropriate to designate it as the State Dinosaur.
C.52:9AAAAA-1 Designation of State Dinosaur.
2. The Hadrosaurus foulkii is designated as the New Jersey State Dinosaur.
3. This act shall take effect immediately.
Approved June 13, 1991.

For more information about the Hadrosaurus visit www.hadrosaurus.com 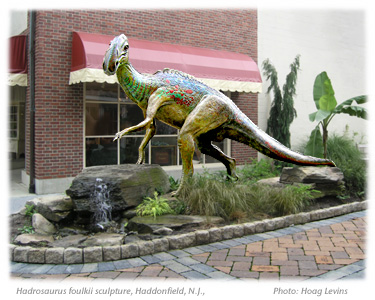